We are endeavouring to compile a potted history of Scouting in Cullingworth and will display it here as we put it together.  This information is therefore incomplete and to some extent may be inaccurate.  We are aware that Scouting in Cullingworth has started and stopped a number of times over the decades, although there is evidence of some level of continuity between the groups.  The current Group was formed in 1977.  There is also evidence that there was some activity in 1912 or 1913.

If anyone has knowledge that can be used to fill in any gaps or correct any mistakes then please contact Stephen Davy (stephen@davy.me).  At the moment we are particularly interested in the period before World War One but, or course, information about any period would be welcome.

Although not strictly connected with Cullingworth, we know that a Mr W Anderton of Halifax Road Cullingworth was asked by 2 boys in late 1908 to "form a troop of Scouts which became part of the Bradford Association, meetings being held at the Y.M.C.A. Rooms in Horton Lane, Bradford".  Mr Anderton was active in Keighley and Cullingworth later....

By October 1912, Mr Anderton had become Assistant District Scout Master and reported on the lack of good Scout Masters in the District and also announced three competitions which were to be held in Bingley, Cullingworth and Skipton.  Did this mean that there was a Scout Troop in Cullingworth in October 1912?

In October 1914, Mr Anderton retired as District Scout Master retired but was elected to the Executive Committee and the District minutes show that he was a Scout Master and this was probably at Cullingworth.

In September 1915, Mr Anderton organised a field day to be held at Cullingworth YMCA .

In October 1915, Mr Anderton was still living in Cullingworth and was still listed as Scout Master.  It was also reported that, by this date, 11 Leaders and 49 Scouts had enlisted in the armed forces.  We think one of these was Mr Alfred Stitson from Cullingworth.

We see no more mention of Mr Anderton after October 1916.

In January 1927, Cullingworth  Church Scout Troop was formed, controlled by St. John's Church, headquartered at Church Schools Cullingworth.  The initial Scout Master was George Marshall.  This is the first record of a Scout Troop or Group from Cullingworth registering at HQ.

In November 1931, Cullingworth Church Troop changed it's name to Cullingworth Group, where St. John's Church relinquished control and the Group became "open".  The Group Scoutmaster at the time was Ernest Slater.  (Note that the word "Group" now appears.  The concept was introduced in 1928 and grouped together Scouts, Cubs and other sections, but it doesn't necessarily mean Cullingworth had a Cub Pack.)

The Bingley Scout District Local Association was split from Keighley at some point between 1926 and 1936.

In June 1956, 11th Bingley (Cullingworth YMCA) Scout Group was registered with Cubs, Scouts and Rover Scouts (senior Scouts) in the Bingley District.  Although the Group is shown as registering in 1956, the Leader record indicates that there were appointments made in 1950 and 1953 so this record was possibly carried over from the previous Group.  This might indicate that there was actually continuity between the 1931 and 1956 Groups and perhaps this registration just reflected the YMCA sponsorship.

The same Leader record shows that the Group Scoutmaster / Group Scout Leader in 1957 was J Brearton.

From 1959 until 1976 the Group operated with mostly Cubs and Scout sections although it appears that it was just Cubs in 1961 and a senior section also existed in 1965 and 1966.

The record card was amended at some point, possibly 1968, to change the title to 11th Keighley (Cullingworth), denoting both the transfer back to Keighley District and the change of classification from "sponsored" (by the YMCA)  to "open", although these two events might not have happened at the same time.

In response to the Chief Scout's Advance Party Report, published in 1966, at some stage between then and 1976/1977, 11th Keighley (Cullingworth) became part of 4th Keighley Pennine "Super Group", which was a combination of a number of Groups in the District.  Other "Super Groups" were also formed in Keighley District and, presumably, nationwide.  The exact dates are not known (although are within living memory) but it possibly started at the same time as Cullingworth moved back to Keighley District.  It is believed that the "Super Groups" were too unwieldy and many did not last long before they split up again, some with different registrations to those held earlier.   This was possibly in 1976 when the 1956-1976 Group closed.

The current Group was formed in June 1977 with Cubs, Scouts and Venture Scouts (the senior section) as an "open" Group, confirming that the link with Cullingworth YMCA was no longer in place.  The initial Scout Leader was also a Leader on the record card already mentioned so, again, there was some level of continuity between this and the previous Group.

My thanks go to all who have provided information and have helped me piece together this history, and continue to do so as we expand and build on what we have so far. 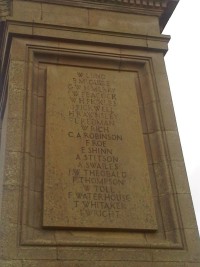